Wow, it’s been a long while since the last update on this site. Now that the summer holidays and some even bigger distractions are past us, we are very happy to announce our first own game development project!

Notice that? It’s we, not just I. For developing it’s very own games, Zestnut has doubled into a team of two. The other half is a gifted artist called Ana, and you can see her works in Instagram and ArtStation, for example. We are creating this game as a side project on top of everything else, and working remotely almost in the opposite ends of Finland. Therefore we are making no promises on anything like milestones or release dates. The point is just to own a really nice project that we have full control over and to hone our special skills on. However, it is certain that this game will be finished and released, in a state or another, on a date to be determined in the future. Let’s see how it goes.

The game itself is “an endless dungeon roller that you control by tilting your mobile device”.

The playable characters in the game are medieval fantasy heroes of different shapes and sizes, rolling through endless tracks like bowling balls, punching monsters out of the way, dodging traps and collecting treasure and new powers.

Spin Squad is being developed for Android devices, and it will very probably be free to play. Our game engine of choice is Unity. 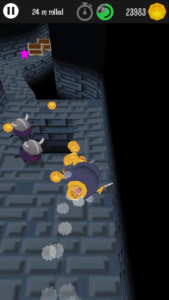 Here’s a glimpse of what the game looks like right now, still with some placeholder art in there.

Stay tuned for more information on the game, the work that’s been done so far, and updates on how we’re progressing in the future. Of course lots of testing will be required, actually quite soon, so get ready for being invited to join us for that!